With four good months of thundering & storming Nashik now seems to be set for winter and as the best season of Nashik is officially here, Don’t you think it’s time for you to tighten your shoes and pickup the hipsacks for long road trip. Now if you are already planned a trip go ahead with your friends and family to relish your moments. And those who’re still confused! Don’t worry we have some plans for you. This winter we have listed down few closed weekend gateways where you can have a nice weekend  get together with your friends and families. All this places are just couple of hours away by drive from Nashik. Surrounded by nature landscapes and greenery an ideal for winter weekend.

1.Karna Fort & Bird  Sanctuary: Karnala Fort is a hill fort in the Raigad district about 10 km from Panvel city. Currently it is a protected area located in the Karnala Bird Sanctuary. It  was a very strategically important place because it gave the pass that connected the Bor Konkan coast in Maharashtra (Vidharba) and was the main trade route between these areas.

2. Daman & Diu: Daman is a popular tourist destination, mainly because of the freedom to drink alcohol, which is prohibited in the neighboring state of Gujarat. It attracts mainly tourists from neighboring regions like Vapi, Bhilad, Valsad, Surat and Baroda same. The two famous beaches of Daman are Devka Jampore beach and beach, which are in Nani Daman and Moti–Daman, respectively.

3.Bhandardara: Bhandardara is a holiday resort village on the western ghat of India. The village is located in the Ahmednagar district of the state of Maharashtra, about 65 kilometers from Nashik.Bhandardara sits by the Pravara River, and is a blend of natural beauty, waterfalls, mountains, tranquility, greenery, invigorating air and pristine ambiance. The Bhandardara Lake and the Randha falls are major tourist attractions.

Distance from Nashik to Bhandardara : 65 KM

Harishchandragad is a hill fort in the Ahmednagar district of India. Its history is linked with that of Malshej Ghat, kothale village and it has played a major role in guarding and controlling the surrounding region.

Distance from Nashik to Harishchandragad: 106KM

5. Malshej Ghat:  Is a mountain pass in the Western Ghats range in the Pune district of Maharashtra, India. The site is nestled in the lofty rugged hills of the Western Ghats.The site is home to hundreds of different kinds of flora and fauna especially the avian population such as quails, rails, crakes, flamingos and cuckoos. 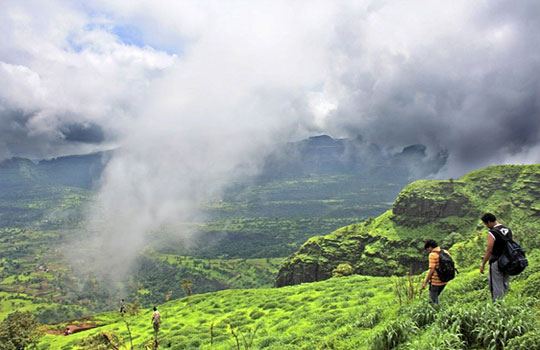 Hope you’ll have a great weekend!

We know Nashikkars will never outgrew their love for misalpav, but when you are on break, head over to these amazing places to fix up your mornings. #nashik #breakfast #food #foodgasm #foodie #foodblogger #foodphotography #breakfastideas
Tired of eating same old breakfast? We too. So head over to some of these eateries and start your day with amazing breakfast like a king! #breakfast #breakfastideas #breakfastlover #breakfastclub #kheemapav #englishbreakfast #rosomlette #nashikfood #nashikcity #foodgasm #foodie #foodblogger #foodphotography #instafood
No non sense guide to eat pizza 🍕in Nashik! Browse through our favourites, which will be yours too! (hopefully, if you love good pizzas)
We can’t imagine Ganapati festivities without Ukdiche modaks, And we know how hard it is to find a nicely done modaks when you are craving for it. To make your life easier we have curated a list of must have modak places around Nashik city, so go get yourself your modak fix! #modak #ukdichemodak #modakrecipe #modaks #dessert #ganeshchaturthi #ganpati #ganesha
Searching for a perfect Onam Sadhya this week? We’ve got you covered!
Ratnagiri’s famous Sea food restaurant @hotelamantran_nashik is now opened in #Nashik so if you are an avid seafood lover this space will surely a perfect fit for your seafood craving. We tried their chicken wade thali and surmai thali both were totally worth the hype. Do check this place #seafood #seafoodnashik #nashikfood #fishfry #fishcurry #nasik #foodgasm #foodblogger
*AAIKA NA NASHIKKAR* a road Safety Initiative by Nashik First & Lord India Pvt Ltd
*AAIKA NA NASHIKKAR* a road Safety Initiative by Nashik First & Lord India Pvt Ltd
Nashik Rains staple! Crispy and hot Pav Vada. Which is your favourite snack in Nashik’s Rain let us know in the comments section below #pavvada #vada #rain #monsoonfood #nashikfood #foodienashik
Nashik’s best chicken and mutton thali, Vinayaka Hotel.
What a beauty! Have you visited @mtdcboatclubnashik ? Located in the backwaters of Gangapur Dam, The boat club has been standing tall attracting thousands of tourists across the country! So put it on your waitlist and enjoy the breathtaking views Nashik has to offer. #nashik #boating #mtdc #mtdcboatclubnashik #mtdc_official #maharashtra_ig #maharashtra #travel #explore #waters #sports
No matter how summer will try to roast you, True Nashikkar will start their first weekend meal with Misal Pav! #misalpav #weekend #nashikfood #grapes #nashikfood #misal #foodgasm #foodblogger #foodie #foodphotography